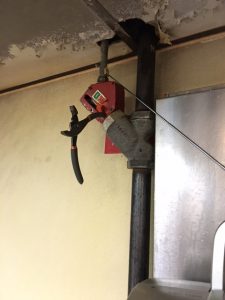 Our team recently performed service to a customers kitchen fire system and found that the system had been discharged. Now the customers manager said they didn’t know that had taken place either.

This stresses the point on why it is so critical that semi annual inspections take place on commercial cooking operations in order to maintain the operational readiness of the suppression system.

In this instance, a catastrophic event could have occurred because there was no agent left in the cylinder from the system having been previously discharged. The gas valve that closes so no more gas can fuel the fire was pinned open by a pair of pliers as you can see. So if another fire would have occurred the gas valve would not have fired and no agent would have been dumped on the fire.

General Fire & Safety is here to perform fire safety service for you in order to maintain your critical fire fighting equipment and protect the building and those that work and patronize the business. Contact us at 515-265-3206 and see us at www.Generalfireandsafety.biz

Check Us Out On Social Media: